The Commodore by P.T. Deutermann
My rating: 5 of 5 stars

Another entertaining novel by P.T. Deutermann. Having now read two of his books, it's clear he knows his stuff, both in terms of the navy (not surprising with his personal history) and military history. Also important is that he creates character worth rooting for while not pulling punches on the brutality of war. Overall, just a great book.

Posted by Jess at 6:19 PM No comments:
Email ThisBlogThis!Share to TwitterShare to FacebookShare to Pinterest

If you know us, you know we have two dogs, Lexi and Tucker. Lexi was the queen of the house until Tucker came along. Well, okay, I suppose she still is. 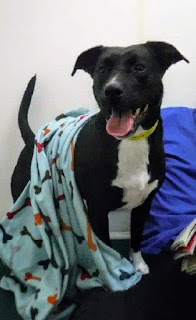 When Tucker came along, she didn't seem thrilled. Why did she need some other dog in her home? Things got even rougher when she got very ill a few months later. Tucker wasn't particularly helpful. There were times when she was so sick that all she could do was lie there. It was really bad... and he did things like step on her. Such a clod.

Thankfully, she survived after a long battle, and then made his life miserable for a bit. He deserved it. She didn't actually hurt him, but when she got her strength back, she made a point of reminding him that she's a lot bigger than he is.

With all of that said, they've found their way over the last couple of years. They have a somewhat adversarial relationship, but it's very much like young siblings. They work together on important things, like confronting the "mailman threat." But then they'll jump on each other and wrestle. Tucker will steal her food. It's all part of their relationship.

So this morning, Tucker went to the vet for his dental cleaning.

On his way to the doggy dentist this morning

I crated Lexi while I got Tucker ready and took him out. When I got back from dropping him off, I let her out, let her hit the yard and then gave her a treat. Then I made her breakfast... which she wouldn't even look at.

I've asked her several times to eat her chow. Nope. She'd rather sit in the front door and sulk. It's really funny. If she could speak, I think she might say, "Yes, he's a pain in the ass, but he's my pain in the ass and my brother. So where is he?"

A few hours later, and she's still acting strangely. We may not understand everything they try to tell us, but dogs have strong bonds and strong emotions. I suppose that's part of what makes them great.
Posted by Jess at 11:44 AM No comments:
Email ThisBlogThis!Share to TwitterShare to FacebookShare to Pinterest

The Mark of the Assassin by Daniel Silva
My rating: 4 of 5 stars

I've been a Daniel Silva fan for a long time. I've read either all of his Gabriel Allon novels or almost all of them. Either way, I like his work. So I decided to go back and read something from earlier in his career. That led me to The Mark of the Assassin. Opening with a terrorist attack that clearly echoes the explosion of TWA flight 800, the book follows our hero, Michael Osbourne, as he deals with a deadly assassin, the former KGB killer--and now killer-for-hire--known as October.

With Mr. Silva's skill for building relatable characters and an engaging plot, this was a quick and entertaining novel. More than his Gabriel Allon novels, this novel, with the evil, super-powerful organization working behind the scenes, had a Robert Ludlum feel. That's different but not necessarily a bad thing. Ludlum created some great stories. I enjoyed this book!

Posted by Jess at 1:24 PM No comments:
Email ThisBlogThis!Share to TwitterShare to FacebookShare to Pinterest

Fair Warning by Michael Connelly
My rating: 4 of 5 stars

Veteran reporter Jack McEvoy gets dragged into a murder case when the police question him as a suspect. As he pursues the case himself, he finds himself dealing with a brutal serial killer whose evil is fueled by mishandling and misuse of DNA tests. For anyone with a concern about sending DNA samples in to one of the many companies who promise a personalized analysis, this story could quickly take you from general privacy concerns to outright fear.

I am a big fan of Michael Connelly's writing, and he delivered a good story here. Not his best, but still pretty solid. I tore through it in a few days.

Posted by Jess at 4:54 PM No comments:
Email ThisBlogThis!Share to TwitterShare to FacebookShare to Pinterest

I've occasionally read "alternative history" books, but I've found a number of them poorly done. Not so with this one. Robert Conroy has a solid enough grasp of actual history to have been able to put together a compelling story. This book isn't for the squeamish, as there is graphic violence and descriptions of torture and murder, as well as graphic scenes of rape as well as consensual sex.

I actually listened to an audiobook, but the version I have (narrated by LJ Ganser) isn't among the audiobooks listed in the editions here. In any event, the audiobook was well done. The above scenes that weren't for the squeamish had me cringing, as did the multiple uses of "knots per hour." That should simply be knots (no "per hour" in an expression of speed in knots). A small point, I suppose, but that made me cringe, too. A knowledgeable author should know better, especially for a book that's so navy-focused.

But back to 1942 overall. The premise is that the Japanese Navy followed their attack on Pearl Harbor with attacks on the dry docks and oil storage facilities, attacks they didn't actually carry out on that day of infamy. They then landed troops and took over the Hawaiian islands.

From there, the United States must determine if and how it can respond. The entire war shifted from the outset, and the real risk existed in this alternative timeline of the Axis powers getting the upper hand permanently. The plot and characters are interesting, and I found this entertaining.

Posted by Jess at 6:02 PM No comments:
Email ThisBlogThis!Share to TwitterShare to FacebookShare to Pinterest

One Minute Out by Mark Greaney
My rating: 4 of 5 stars

Thought provoking? No. Educational? Not a bit. But that's not why we read Gray Man books. Rather, this is a fun romp, as our hero kills very bad men who are engaged in very evil doings. It's brain candy. Don't expect any more than that, and it's a very enjoyable book.

Posted by Jess at 5:27 PM No comments:
Email ThisBlogThis!Share to TwitterShare to FacebookShare to Pinterest

Broken by Don Winslow
My rating: 4 of 5 stars

This is my fifth Don Winslow book, so his ability to delve into painful-to-read brutality isn't a surprise. Sometimes I feel like it's a bit overdone, going for shock value as he ruthlessly kills off good people, but for the most part he writes excellent books.

Broken is a collection of novellas. Not all of them are completely distinct from the others, as there is some limited overlap of characters, but the storylines are distinct. While some of these novellas went in directions one might find uncomfortable, part of that is driven by Winslow's ability to write characters you will care about. The characters are flawed and relatable. Some are repulsive and others downright charming.

Overall, Broken is a good book, one that made me anxious to keep reading, even when it was late at night and I really needed to get my sleep. I didn't find it to be quite on the level of The Border or The Force, but it still was quite good!