Closing in on the new car

As you may recall, I'd previously mentioned that I've been car shopping. The Lincoln MKT was a serious contender, but since that time we learned more and decided it wasn't a fit.

So now we get back to one of the other finalists, the Ford Explorer. Happily, the more I learned about the Explorer, the more I wanted one. I even have a probable color picked out, so I can tell you it probably will look like this: 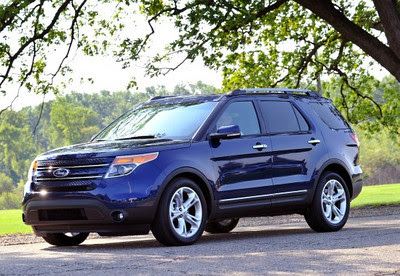 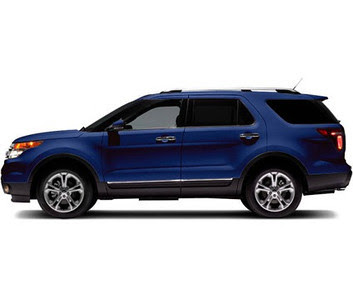 We'd both sat in Explorers in a couple of dealers (have to shop around to see what you can leverage in a final deal!), so we knew it was comfy for driver and passenger (vital for our long drives). The features and technology--and everything else about it--we liked a lot. That left the test drive.

We took that test drive on Saturday. Wow, we were impressed! What a nice ride! It doesn't have quite as much speed as the Infinitis we have now, but it's still plenty of get-up-and-go (the Infinitis are silly fast--not that I was complaining). The Explorer has more than enough power for those highway on-ramps and passing needs.

So now I'm doing the "I'm not in too much of a rush" thing with the salesman. Can't seem too anxious! His numbers already are far better than the other dealer, but there's always some room for sweetening the deal. Still, I think this is the one, and I feel like a kid waiting for his birthday present! :)
Posted by Jess at 8:46 PM No comments:
Email ThisBlogThis!Share to TwitterShare to FacebookShare to Pinterest

I'm a little late on posting these, but the New Year brought both birthday celebrations for the eldest and youngest members of the pack, as well as baths for all three of the kids, since the weather was warm enough that we weren't concerned about any residual dampness in their coats when they'd go out a few hours after their baths.

We'll start with the birthday girl, Bernice, who turned 14 this year... 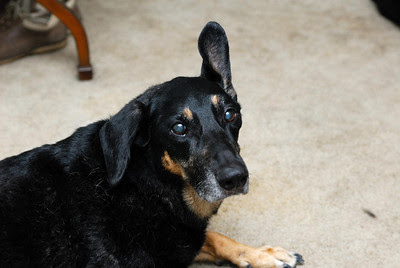 This is before she got brushed out, so she still has some stray undercoat pieces marring her beautiful black fur

She's looking pretty good for 14, isn't she? We're worried for her and know she's much older than the vet thought she'd ever be, but we have to take comfort in knowing we've done well by her and she still has a good life! 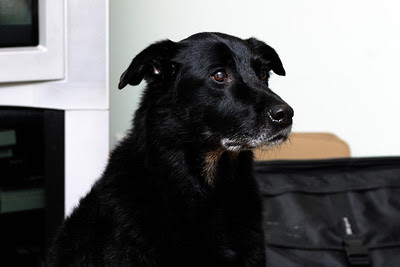 This doesn't quite capture it, but 12-year-old Mandy gets very poofy after a bath!

Actually, Mandy gets poofy and very smooth. When freshly cleaned, her fur is so soft, it feels like a mink coat! 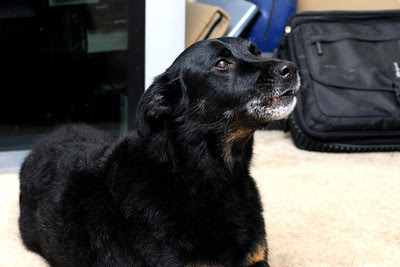 Mandy can be talkative, and this was especially so after the bath! 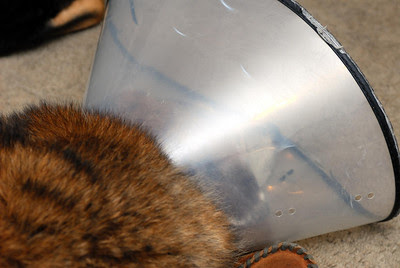 Someone wound up in a cone, because he wouldn't stop trying to groom the "stink" of shampoo off of himself!

Last but not least is a photo of Mandy that really captures her mood after a bath. Ears down, sad looking face... In fact, we were considering a little work in Photoshop to add numbers to make this look like the complete mugshot that it really is... 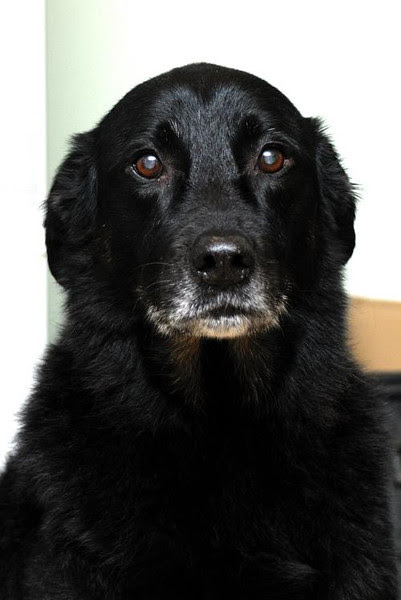 Well, at least this shows some of the poofiness!

Seems like we should have the Dragnet announcer, saying, "Mandy T. Dog was tried in Department 187 of the Superior Court of the hamlet of East Meadow and convicted of kibble theft in the 3rd degree. She's currently serving a 15-minute timeout on the couch."
Posted by Jess at 4:15 PM 4 comments:
Email ThisBlogThis!Share to TwitterShare to FacebookShare to Pinterest
Newer Posts Older Posts Home
Subscribe to: Posts (Atom)