We went to Wichita for a couple of reasons. One was a family reunion for Marc, and the other was to catch up with some friends.

For now, I have a photo of one of our hosts. We spent much of our time with our friends Brad and Bob, but the photo isn't of them. They're pretty cool guys, but the photo is of the coolest guy at their place. His name is Vincent, and he's quite the cool cat. ;) Here he is... 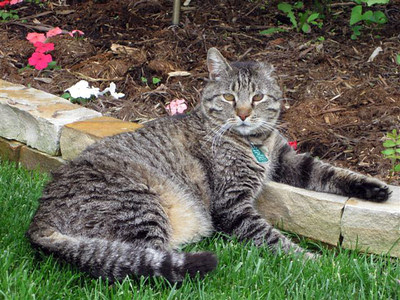 Notice something missing? From the top of his head on one side? Hence the name.

He's a real character. At first, he was a bit standoffish. You know, kind of like a cat. Then, while I was sitting beside the pool, he came over and let me scratch him. After I did that for a little while, he reached up and grabbed my hand with his paws, keeping his claws retracted, and began licking my hand. It was a very nice "thank you." The problem is, when I played with him later, he got friskier and then there was some claw action. He didn't leave a scratch, but I could have lived without that! :)

No, I don't have a photo of the pool (it's a big in-ground pool that was lovely on a hot day) or their fabulous house. I was more focused on relaxing than documenting the visit. The guys are great to hang out with, and I hope they know how much we appreciate their hospitality. All in all, it was a great visit! Thanks, guys!
Posted by Jess at 9:20 PM 4 comments:
Email ThisBlogThis!Share to TwitterShare to FacebookShare to Pinterest

Lacking anything more exciting to share, let's look at more rugby photos. But before we do that, let me say that we had a nice time today at a brunch hosted by the Long Island GLBT Network. The special guest at the event was Congressman Steve Israel. We really like him, and not just because he's an equal rights supporter. He also is an intelligent, articulate man with a record of speaking his mind and splitting from his party when he thinks they're wrong.

So that was nice, but now let's look at more rugby photos... 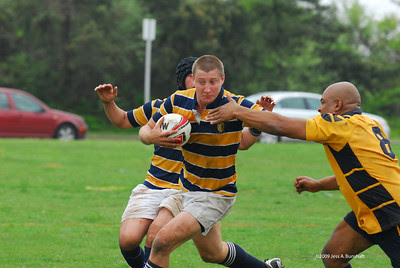 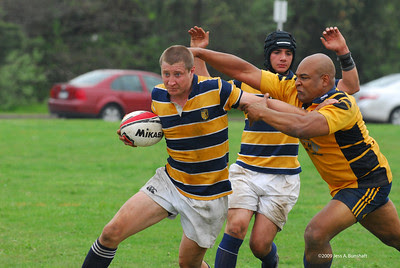 There are a few more in this series, but let's skip ahead to my favorite two... 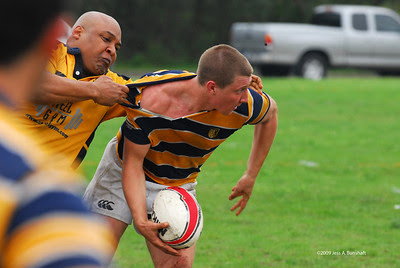 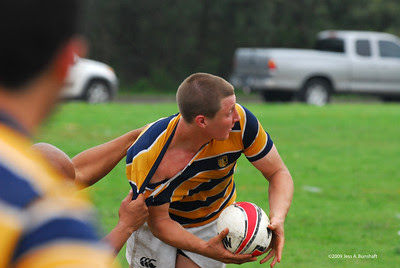 Is it so much to ask for the shirt to have ripped off of him? But nooooo, it has to be well made! Damn. 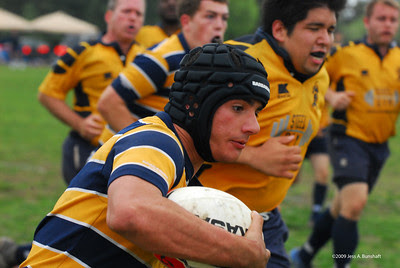 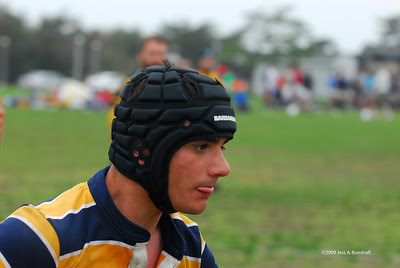 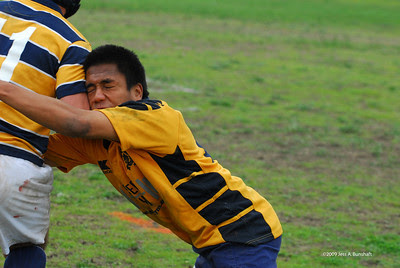 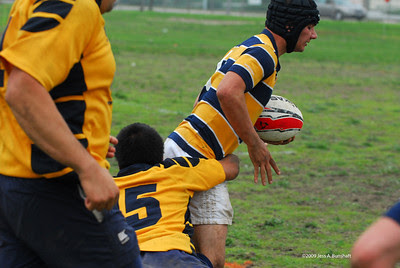 Okay, time to go see what my husband's doing and then get in his way. :)

Hope you're all having a good weekend!
Posted by Jess at 10:15 PM 2 comments:
Email ThisBlogThis!Share to TwitterShare to FacebookShare to Pinterest

I never did finish posting rugby photos, so I might as well share some more. Yes, Farrah Fawcett died today, although that was somewhat expected, as did Michael Jackson. Michael Jackson's passing is shocking, and I find myself really sad over it. He was a musical genius and a troubled soul, as so many geniuses seem to be. By coincidence, Marc and I were discussing that very subject relative to Mr. Jackson just a few days ago.

Anyhow, rather than dwell upon these sad losses, let's look at some lovely rugby players... 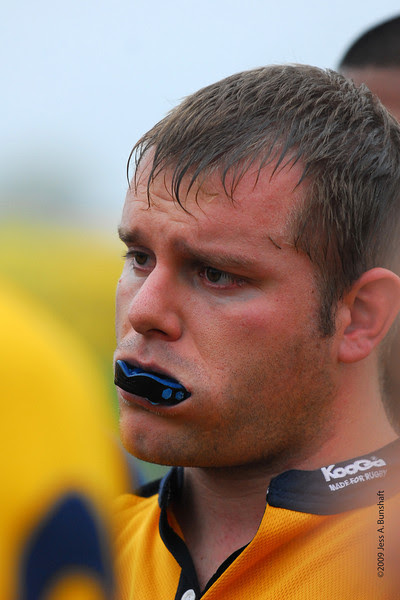 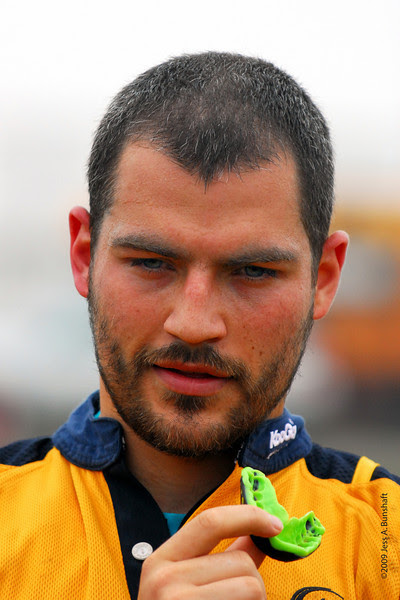 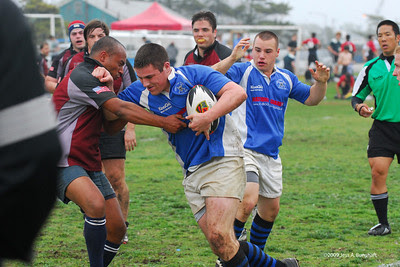 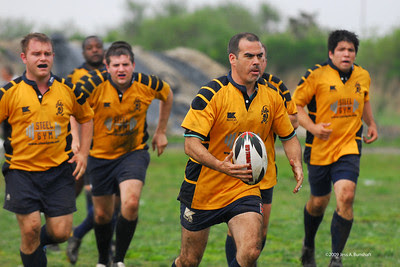 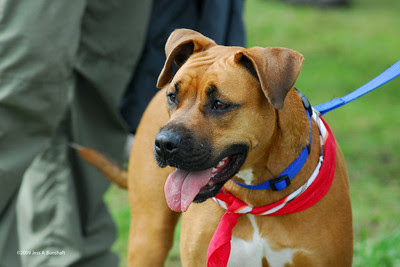 This young lady was being driven nuts, watching rugby balls flying around but being unable to get to them! 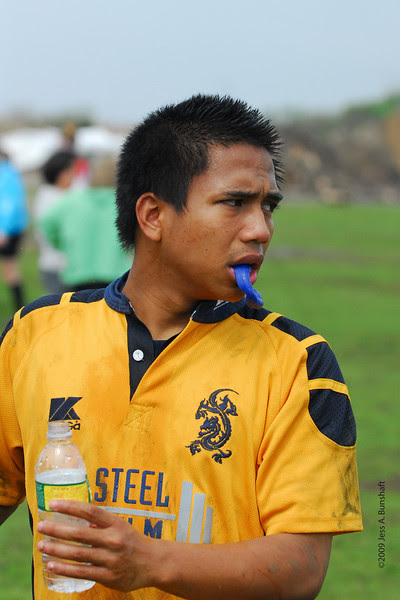 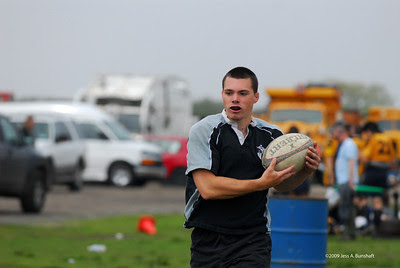 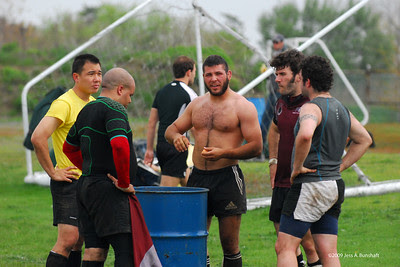 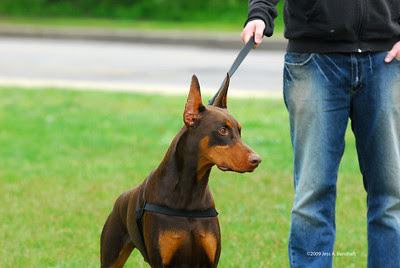 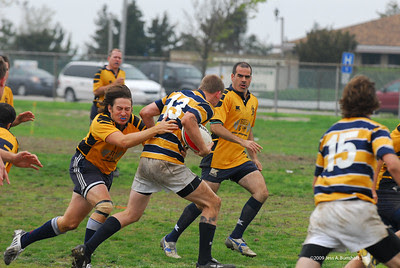 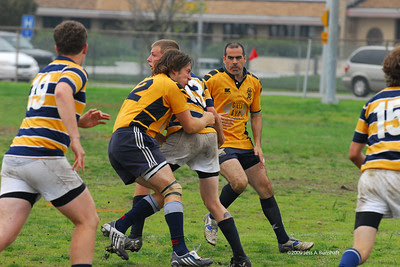 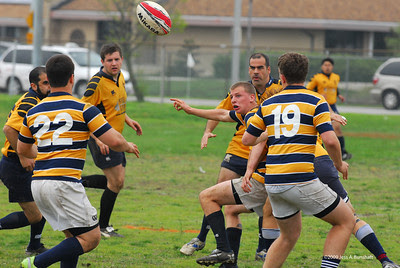 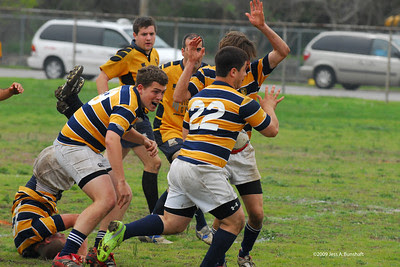 As always, you'll get bigger versions if you click on them. Hope you enjoy them!
Posted by Jess at 7:15 PM 3 comments:
Email ThisBlogThis!Share to TwitterShare to FacebookShare to Pinterest

Posted by Jess at 11:37 PM 3 comments:
Email ThisBlogThis!Share to TwitterShare to FacebookShare to Pinterest

We're in Wichita, Kansas. We went out to dinner with our friends Brad and Bob. Now we're back at our hotel, sitting in a room on the 15th floor of the Hyatt Regency. On the way here, we endured blinding rain, and our car got pelted with hail.

From our windows (it's a corner room, so it's great for observing), we've watched some impressive wall clouds head our way. As I type this, rain is pelting the window, there are bolts of lightning all over, and we can see things being blown sideways in the outside lights.

I don't think we're in much danger. The weather radar was showing reds and purples heading our way (and hail isn't a great sign), but we can head to the bathroom or a stairwell if there's any sign of a tornado. Even a big one shouldn't do too much damage to a building like this. We just need to make sure we're not near any windows!

I'll stop now, since we may lose the Internet connection (the TV's already out--amazing this still works). Back to watching the light show!
Posted by Jess at 10:05 PM 3 comments:
Email ThisBlogThis!Share to TwitterShare to FacebookShare to Pinterest

Long Island Gay & Lesbian Youth (LIGALY) runs an annual competition called Out Idol. There's a similar competition on television--if you've heard of it, you may know that it's a singing competition, as it Out Idol (on which the TV show is based, if I'm not mistaken). ;)

We have been judges at the competition for a number of years. I'd like to say it's our excellent ability as judges of singing, but I suspect our giving money to LIGALY and their parent, the Long Island GLBT Services Network, probably doesn't hurt!

This year, there was some serious competition. Usually, we get a couple of decent singers, as well as a group of nice kids who aren't going to be turning out albums anytime soon. This year was different. The three finalists all were excellent. The winner had an off night, but he still did great.

Unfortunately, the only video of it was taken with a little handheld camera, and it doesn't pick up the sound too well at points (watching the video, our winner doesn't sound nearly as good as he did in person). Even so, this gives you some idea of his sound.

It doesn't hurt that Jimmy's a good looking kid (too bad this doesn't get close enough for you to see his beautiful blue eyes). I suppose it also doesn't hurt his allure that he's reporting for duty with the US Marines in July (yes, he's a gutsy kid, especially since he's sticking his neck out beyond the way Marines usually do--the venue for this competition should explain that well enough). But he really won because he has a terrific voice.

And if you're at all interested, if you watch to the end, you can see me and Marc. I speak third and Marc is fourth.

When we tallied our votes and the audience votes, we were in a dilemma. We had the unusual situation of, in effect (the math is a little weird), a tie for second. Jimmy had won and the other two singers were in a tie. What's funny is that Jimmy wasn't always an audience favorite and apparently took the "tie" the wrong way. He thought the other two were tied in a way that left him in third. Then a friend of his in the audience says, "you won!" (you can barely hear it in the video), and the look on his face is priceless. Take a look...