A tree is the perfect remembrance

Around here, we're big on trees as a way to remember a loved one we've lost. You may recall that we've planted trees for such things in the past, as well as joining in such tributes when done by others. So it was a special joy when we came home Thursday to find a box from our dear friend Pua and her entire family that held a baby magnolia tree in memory of our beloved Bernice. (Rumor has it, it was Pua's daughter, Averie, who came up with the idea of sending it. Great idea!) Today, my live-in gardener (yes, that would be my husband) dug a hole in the back of the yard to plant it: 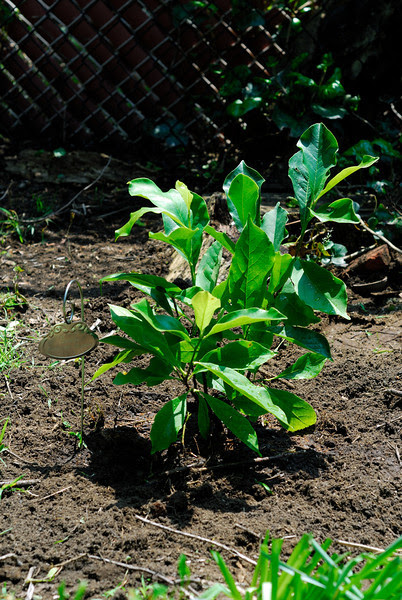 The tree would have been more than enough, but the icing on the cake was this plaque that came with it: 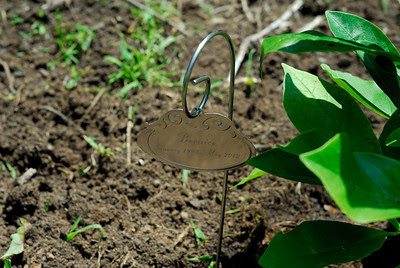 It says, "Bernice, January 1998 - May 2012 Welcome to the family, little tree. May you grow big and strong like the special lady you honor. You have big paws to fill!
Posted by Jess at 1:41 PM 12 comments:
Email ThisBlogThis!Share to TwitterShare to FacebookShare to Pinterest 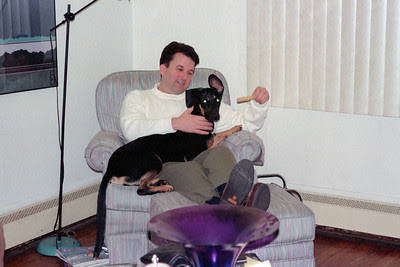 Bernice loved both of us. I have no doubt about that. She was a big bundle of love and dedication wrapped in fur.

Still, from day one, she took to Marc with a love and commitment beyond measure. She took one look at Marc and decided he was IT. This photo, from shortly after we adopted her (look how skinny she was!) really tells the story--click on it to get a better view. They were head-over-heels in love, and that never changed. So wonderful!
Posted by Jess at 9:07 PM 2 comments:
Email ThisBlogThis!Share to TwitterShare to FacebookShare to Pinterest

Do some things happen for a reason?

I’ve always had a hard time with the “things happen for a reason” school of thought. There are too many horrors in this world for me to easily accept that there’s a grand plan into which everything fits.

Still, I was led to wonder this weekend. During a huge crying fit over losing Bernice, I was saying to Marc, in between moments of hysterical mourning, that I couldn’t believe the first people who had her returned her. “How could they be so cruel to her? She was the sweetest girl, and she loved the world. The idea of her bonding to a family and then their returning her. She must have been so horribly crushed.” I wailed, “How could they do that to her?”

That made me wonder. Could there be more? I don’t know. There’s still so much that’s horrible and cruel in this world, but did something greater say, “Bernice, as you’ll come to be known, you deserve better than these people. There are two guys who are going to love you for all your goodness. You hang in there, girl, and they’ll come for you!”

I still don’t know, but I like to think so. A bright, shining beacon of love has left our world. I sure hope we see her again somehow, someday, but for now we hold her in our hearts, pained beyond measure but knowing we were lucky she came into our world!

Posted by Jess at 7:27 PM 3 comments:
Email ThisBlogThis!Share to TwitterShare to FacebookShare to Pinterest

A story of our beloved Bernice 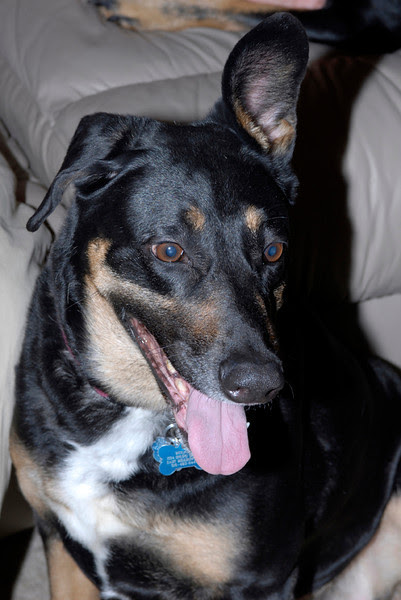 As you may know from seeing me post on Facebook, we lost our eldest two days ago. She was a wonderful girl, and we're heartbroken over her death. My head believes it was the right thing to do, but my heart is crushed and I'm torturing myself over having euthanized her. I'll get past it with time, since we had to keep her from suffering. For the moment, though, I'm really hurting.

Now, I want to start to record some stories of this very special girl who won our hearts all those years ago. I may have to keep this short, because I find myself crying when I try to type things about her. But let's see if I can get an early story down before I have to stop.

We adopted Bernice on October 16, 1998. It was a Friday. We got her from North Shore Animal League. She was nine-and-a-half months old, and she was a bit on the wild side. That's why this almost-grown doggy was there. But she was the one for us (more about that in a future post), and the people who missed their chance to adopt her were fools. We were very fortunate!

When we took her home, she scraped a paw pad on the cement sidewalk as we went to the car--we figured her time in a cage had softened them up, and the soft pads weren't an issue once she had a normal life. We soon saw that the pad was bleeding, and by the next morning we were worried (as new parents) that we needed to do something about it. Since her adoption came with a month of free veterinary care at NSAL, we took her back there (to what we referred to as the "prison vet").

We had to wait a while, and the waiting room was packed. Bernice was a little under 40 pounds at the time, quite lithe and with some growing yet to do (her full, healthy adult weight would be 65 pounds). As we sat on the waiting room benches, there was another dog there, a significantly larger dog that was acting aggressively toward all of the other dogs there. When he tried to provoke Bernice, we kept a tight hold on her leash and she actually behaved quite well. She let it go.

Then the big dog growled at a little puppy sitting nearby. With that, Bernice pulled away, stood in front of the puppy, turned to the big dog and showed that dog what all of the teeth in her Doberman-Shepherd mouth looked like. The dog turned tail and hustled back to hide with its owner. Bernice walked back over and sat down by us, and that was the end of it.

That was our girl. She was there to protect us--there never was a doubt about that--but she also was very much the champion of those who couldn't protect themselves. Heaven help any bully if she was around. We already were falling in love with her, but that really told us that we'd brought someone very special into our family!
Posted by Jess at 7:49 PM 10 comments:
Email ThisBlogThis!Share to TwitterShare to FacebookShare to Pinterest
Newer Posts Older Posts Home
Subscribe to: Posts (Atom)