Today, I deactivated my Facebook account. It may not last--some friends won't be happy with this--but I've toyed with the idea for a while.

While Facebook can be great for reconnecting with people you haven't seen in years and keeping tabs on others, it's a huge time drain. Yes, I could just limit my use of it, but that doesn't really happen, even when I tell myself it will. It's like a Siren, calling me to crash on the rocks of wasted time. I definitely have better things to do.

Also, friends who I know don't mean harm (I know them in real life, so I know them well enough to be sure) post things that upset me. Why would I want more of that? So it was time to shut it down. The negatives outweigh the positives. Who needs that?

Posted by Jess at 2:48 PM 2 comments:
Email ThisBlogThis!Share to TwitterShare to FacebookShare to Pinterest

Picking up and moving forward

No, this isn't another post about mourning for our lost doggies. Rather, this has to do with yesterday's accident at LaGuardia Airport, where a landing Delta plane slid sideways and slammed into a fence near the water.

I saw on last night's news that they had a crane starting to remove the plane, but I still couldn't figure how they could finish the NTSB investigation and get the airport reopened by this morning (as they said they had). It's not like LaGuardia has lots of spare capacity. Their old runways are barely enough to do the job on a normal day.

Then today's commute to work showed me how they had adapted. My commute takes me right by the airport. It's fun (for an airplane geek like me, at least) when a jetliner flies right overhead, as it touches down on the runway that starts right next to the parkway. Since I'm heading roughly west at that point and the airplanes pass from my left to my right, I'd say that's runway 04 (yes, I've even looked up LGA's runways). My commute also gives me a good view of the other side of the airport, as I drive along the Whitestone Expressway for a short distance. From that, I know (and gather this is common, except at really small airports) that they use one runway for landings and another for takeoffs on a typical day.

On a typical day, my close pass by the end of runway 04 will either let me see planes coming in to land or planes lined up to take off. In the latter case, as each one takes off, the next moseys up (a technical aviation term) for its turn, a nice slow taxiing to the threshold of the runway.

Today, however, I saw both planes coming in and planes waiting to take off from the very same spot. I could see the line in the sky to my left and the line on the ground to my right. As I sat in traffic (did I mention it can be a lovely commute on the Grand Central Parkway?), I saw a plane land and then one of the ones on the ground taxi very quickly into position, followed by the immediate roar of its engines as it started its takeoff roll.

I guess that's the answer for now. They're doing a tightly choreographed dance, with takeoffs and landings on the same runway. The coffee machines must be working hard in the LaGuardia Tower and TRACON in Westbury. As exciting as it sounds, I'm glad it's not me in one of those air traffic controller seats. The stress level must be huge today! (And I doubt the passengers even realize--at least most of them. In fact, I'm sure any number of the passengers have been grumbling about delays, without giving a thought to what all this takes. Anyhow, I'm impressed!)

Posted by Jess at 12:28 PM No comments:
Email ThisBlogThis!Share to TwitterShare to FacebookShare to Pinterest

The time it takes to heal

My last post shared the news of Dodger's death. Even then, the news was weeks old. At this point, over three months have passed, but it still hurts. Still, I'm trying to cling to the happy memories and let the heartache go. It hurt when the girls died, but I feel like I dealt with those losses better. That may be because I still had canine love in the house to help me through.

For a lot of reasons, we're not getting another dog now. We will, someday, but not now. I just wish I could stop hurting so much. And one of my silly little joys related to the dogs has now become a bit of salt in the wound. I'd rewrite song lyrics around the dogs. In the past couple of years, mostly around Dodger.

These days, the Dodger songs run in my head all the time. I'm not a religious person, but I sometimes feel there's more. I honestly don't know, but I hope there's a spirit that lives on.

Today, I said to Marc, "do you think Dodger's spirit is here with me?" Marc said yes. I said that I feel like he must be. I know my love for him may just have me obsessed with him, and maybe it's that simple. But maybe, just maybe, he is here by me to this day. Actually, right as I was having that thought--and right as I was getting ready to say that to Marc, a little bundle of Dodger fur blew across the floor in front of me. I don't know where it came from after all this time, but it was in some little corner somewhere, and then there it was in front of me at just the right moment. A sign? It sure seems like it.

Worrier that I am, I then asked Marc if Dodger will be upset when the day comes that we get another dog. Marc said that Dodger will understand, because he knows how I love doggies. Still, now I'll worry about that. *sigh* It's not easy living in this head!

In the meantime, I'm trying to remember how he had so much more happiness in his life than pain. I guess I'm getting there, but my own pain is still there. Still, this photo, taken late in his life with his new friend Sid, is a good reminder of what a happy boy he was... 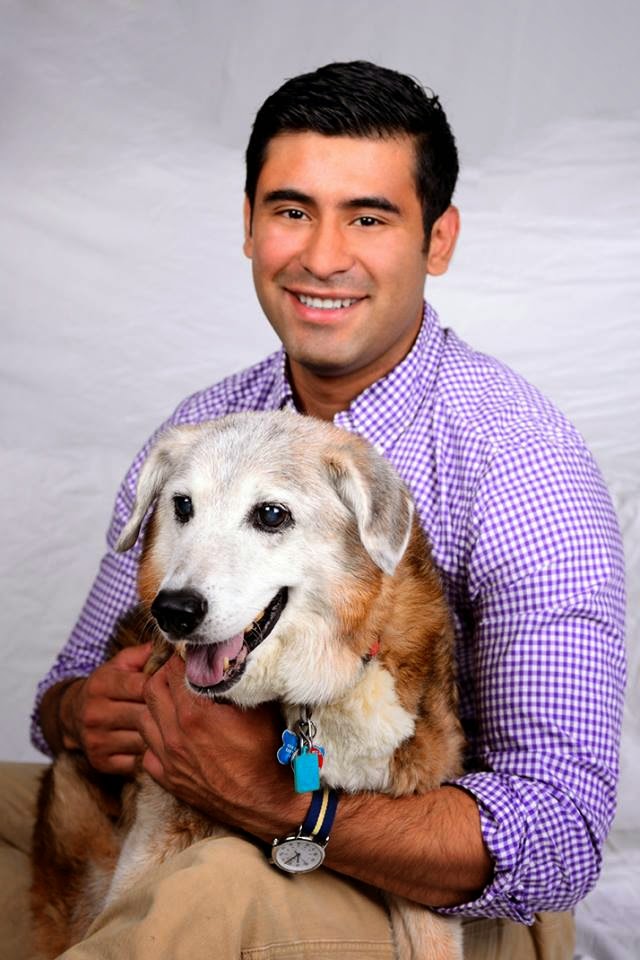