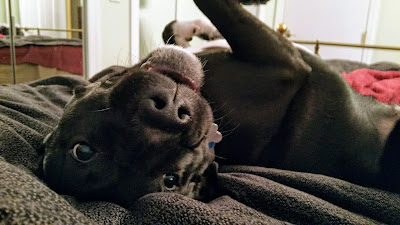 We've always had reasons to be proud of all of our dogs. We've loved them and been impressed by them on many occasions, but there's something about Lexi that's rather extraordinary.

Watching her carefully, you can see a rather impressive mind at work. That mind doesn't work like a human mind, but there's clearly a lot going on in there. Today, she gave us another example.

Before Marc left for work, he gave me a kiss as I was still lying in bed. He often leaves before I'm up, but this was pretty much guaranteed today, since I was out very late because it was election day. I've been working on a couple of political campaigns, and last night's results didn't come in until quite late. Anyhow...

As Marc said goodbye, he told me to keep a close eye on Lexi, because a Milk-Bone had gone astray. After an errant throw, it had landed under/behind an antique tea cart we have. Since Lexi forgets nothing, he knew she'd be after it at the first opportunity.

When I got up, Lexi and I headed downstairs. I looked under the cart to see if I could spot the biscuit. No luck. She watched me, but then she went on her way, leaving things untouched. Such a good girl!

So we did our stuff...
I had coffee.
We went out to the yard.
I fed the birds.
I read the newspaper and watched CBS This Morning.

She never went near the cart. Still being so good!

Then I hit the bathroom. And as I was indisposed, what do I hear? Yup, she's getting under the cart!

I got done as quickly as I could, came back out and found her trotting away with her best I didn't do nothin' look plastered on her face.

She waited until a time when she knew I couldn't react quickly, and then she went for it! OMG, this dog! Even after a couple of years with her, she continues to amaze. Yes, sometimes she frustrates, disobeys, angers, annoys... but still, she's impressive!

Posted by Jess at 12:44 PM No comments:
Email ThisBlogThis!Share to TwitterShare to FacebookShare to Pinterest

A down to earth kind of girl 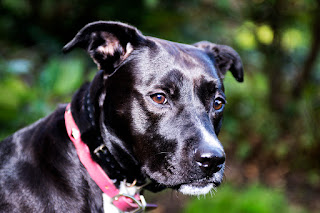 Lexi is a beautiful dog. She's also very smart and very stubborn. Her intelligence and willfulness make her a challenge at times. We thought we'd be done with her training collar by now, almost two years after we got her, but she still needs it a lot of the time.

If she's wearing it, she listens. If she isn't, she knows she isn't and can be very difficult. I might laugh that off, but she could get herself hurt outside by disobeying. She's smart but not about the risks to herself.

This post, however, isn't really about all of that. Well, not directly. Rather, it's about what we expected when we got to know her. We figured that a strong-willed girl like her would be difficult about what food she would eat. For that reason--and also because we tend to spoil our dogs and want the best of everything for them--we bought her the finest gourmet dog food from the start.

What we found over time is that she has what Marc calls "luncheonette tastes." The less fancy the food gets, the happier she is. Today, we were at Petco, and I suggested we try Beneful. Yeah, I know, it's not like it's Alpo, but from the lofty heights of what we used to buy her (gourmet, super-healthy dog foods that were just this side of a Michelin-starred chef coming over to cook for her), this is a serious drop. So did she turn up her nose? Of course not! "Oh, this smells awful! I love it!" And she dove right in! The girl is a mystery.
Posted by Jess at 7:02 PM No comments:
Email ThisBlogThis!Share to TwitterShare to FacebookShare to Pinterest
Newer Posts Older Posts Home
Subscribe to: Posts (Atom)