Here, you have the wit of Anthony Bourdain combined with additional details about places he mentions and guidance on how to get to/around the places he visited. This turns the book into an enjoyable combination of travel guide, foodie narrative and humor, assuming you enjoy Mr. Bourdain's view of the world (which I do). This is an excellent book!

Posted by Jess at 1:55 PM No comments:
Email ThisBlogThis!Share to TwitterShare to FacebookShare to Pinterest 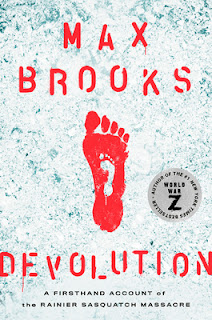 Devolution had me riveted. I suppose I start from the standpoint of a '70s kid who grew up seeing TV shows about Sasquatch sightings, and this book, like Max Brooks' World War Z, tells a compelling story from the perspective of those who lived through it. A small development, out in the woods, is cut off from civilization after Mt. Rainier erupts. That same eruption displaced a Sasquatch troop that has been living deep in the woods for a very long time, so stealthy and so far from most humans that only the occasional sightings have surfaced.But what if they really exist? What if they're out there? What if they were flushed from their normal living and hunting grounds and ran into a small group of humanity. They're hungry and desperate, and they're North America's great ape. Gigantic, hugely powerful, and smart. So now what?The story of this collision of ape and human, and the story of the humans' attempts to survive, is the story of Devolution. This is a terrific tale!

Posted by Jess at 9:07 PM No comments:
Email ThisBlogThis!Share to TwitterShare to FacebookShare to Pinterest

For as long as I can remember, Lexi's favorite people-pleasing trick has been sitting high. It's cute, and it's not the kind of trick you expect for a dog like her. In fact, it doesn't seem like so broad and solidly built dog would be able to do it. But she makes it happen, and I think that may be part of why she likes doing it for us--and especially for Marc--because it's not easy. 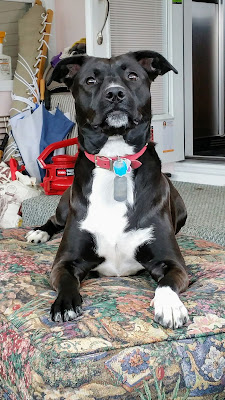 Earlier tonight, Lexi was lying on her bed and Tucker was sitting in front of Marc. Marc asked him if he could sit high, and I saw Lexi's head come up off the bed, like she was not at all amused. As Marc was asking Tucker about sitting high, Lexi gave a little noise that wasn't quite a growl and wasn't quite a grunt. Either way, definitely not a happy sound and clearly directed at Marc.

She stayed there, but as Marc continued to discuss the trick with Tucker, Lexi moved this up to a warning bark. Very unusual for her. Marc got it and stopped, and we've now learned that she not only considers it her special trick but we're to respect that. It's enough we made her share her house with this other dog, but now we might steal her special trick? No way!

Posted by Jess at 8:31 PM No comments:
Email ThisBlogThis!Share to TwitterShare to FacebookShare to Pinterest 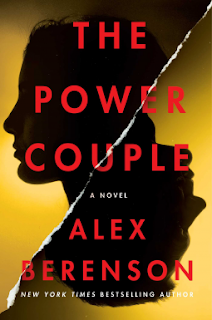 I've been an Alex Berenson fan for years. I enjoyed his John Wells series, and so I wasn't sure what to expect when I saw him heading in a new direction. With The Power Couple, Berenson introduces us to an ambitious lawyer/FBI agent and her husband who is far less of an establishment/conformist type of person.

While Rebecca and Brian seem quite different on the surface, they make it work very well, falling in love, enjoying a great sex life, raising kids, and seemingly having a great marriage. Until they don't. But then they do again. Or do they? And then things take a horrifying turn as they find themselves, instead of being on the crimefighting side of things, as Rebecca normally is, the victims of a terrifying crime.

Even as we're absorbing this turn of events, things really take a wild turn, but it's a believable turn, as well, because Berenson is a skillful author who weaves a complicated yet plausible plot. At least as important, he has the power to develop his characters so we care about what happens to them. Too many authors expect readers to just care about whoever they throw out there, even without proper character development, but Berenson is far better at this. He builds the connection, so you're along for the ride.

I will admit that when a favorite author goes in a new direction, I worry about whether I'll like the new effort. Happily, I was well rewarded!

Posted by Jess at 9:48 PM No comments:
Email ThisBlogThis!Share to TwitterShare to FacebookShare to Pinterest 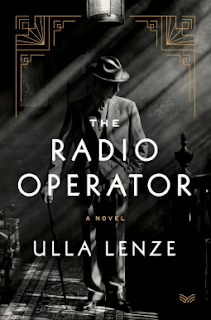 This historical novel centers on Josef Klein, a character based on a relative of the author. He came from Germany to settle in New York before World War II. He worked for a printer that did work for local Nazis, among others. His interest in radio came to their attention, and he found himself dragged into doing work for them.

The book follows Josef from his early years in New York through the war years and into his post-war life, including some romantic entanglement that doesn't really possess any passion in the pages of the book. Josef doesn't come across as the most sympathetic character. He's not necessarily someone to be disliked. Rather, he elicits a sort of emotional shrug.

Even when it comes to the premise of his being a radio operator, a sphere that would have given another author fodder for discussions with far-flung locations during a tumultuous time in history, and allowed her to paint all sorts of interesting scenes, there was nothing there. The author referenced a few conversations with other radio operators in far off lands, but that was it. That part of the story, or a real feel for Josef's love of the radio, wasn't developed.

I don't think the author has the writing power to really develop characters so you care about them. It feels more like she just expects us to care, perhaps because this is based on someone who was a member of her family, so she and her family cared. It just didn't get there for me.  Not a bad book, but definitely not a page-turner, either.

Posted by Jess at 7:21 PM No comments:
Email ThisBlogThis!Share to TwitterShare to FacebookShare to Pinterest

So here we are, finally in 2021. I don't think anyone will miss 2020. Happily, the very end of 2020 saw Marc getting his first of two shots to immunize him against COVID-19. He got that first shot yesterday morning. By 7pm last night, he had a sore arm but that was it.

We spent about an hour on a video call starting around 7pm. That's how I remember when he had the sore arm. Our friend Keir was going to be spending his New Year's Eve alone at his place in Bristol, UK, so we decided to join him by video at midnight his time. We all had our drinks and toasted to a better year to come. Then we spent more time catching up. Always great talking to Keir. We haven't seen him in a while!

Now, about that vaccine. Marc was okay. Then he wasn't. Overnight, he got hit with dizziness, nausea and other unpleasant gastrointestinal side effects. That laid him low for much of today. Fortunately, it was easing off by this evening. He let me make him some pasta (elbow macaroni) in chicken broth with mixed vegetables. Then I made a grilled cheese that we split. He's still sore and tired, but he's definitely doing better. Best of all, he's on his way to being protected against this horrible plague that's killing thousands.

On a completely different note, I'm drafting this post on my reMarkable 2 e-ink writing tablet.

I love this thing, but I think I'll tell you more about it in its own, separate post.

Posted by Jess at 9:41 PM No comments:
Email ThisBlogThis!Share to TwitterShare to FacebookShare to Pinterest

Working from home & those "it figures" phone calls

Once I decided not to pursue another in-house position, the headhunter phone calls picked up. Isn't that always the way?

I just got another one about a healthcare position that actually sounded pretty interesting. But no, with the help of a loving and supportive husband, I'm doing what I want to be doing now, mediation and arbitration. Mostly mediation, really. I love how I can use my skills to facilitate discussions and bring people together, to find ways to resolve matters that work for everyone.

But isn't this the way? It feels like I always got the most attention from placement firms and companies when I don't need it. Now if I could just get those companies to talk to me about their employee relations issues and contract with me to address some of them!

Posted by Jess at 3:47 PM No comments:
Email ThisBlogThis!Share to TwitterShare to FacebookShare to Pinterest
Older Posts Home
Subscribe to: Posts (Atom)