A quick review of a good, entertaining book

Prince Of Fire by Daniel Silva
My rating: 4 of 5 stars

I've liked every Daniel Silva book I've read. I only just got to Prince of Fire, as I'm going back and reading any of the ones I missed over the years. This is one of his better books.

Mr. Silva is a terrific writer, but saying that just isn't enough. He has a level of insight and empathy that sadly eludes most authors of this genre. While his heroes are Israelis fighting to defend their country and other innocents against terrorists, he doesn't make them purely good, and he doesn't paint the terrorists as pure evil. He does show the evil of the terrorists' acts, but he recognizes and acknowledges the wrongs their people have suffered that sowed the seeds of their extremism and hatred.

Prince of Fire is an entertaining, page-turning read, and it also provides food for thought. That's not a common combination! I highly recommend it!

View all my reviews
Posted by Jess at 5:07 PM No comments:
Email ThisBlogThis!Share to TwitterShare to FacebookShare to Pinterest

Bernice & Mandy touched the hearts of everyone they met

We knew that Bernice and Mandy won over everyone they met. Our girls were special. I know everyone feels that way about their dogs, but people who had met them would go out of their way to ask about them and it was clear to us that they really made a great impression and brightened the world.

Now, a sympathy card from the vet can ordinarily be seen as their standard procedure, but I don't think it's standard for it to look like this... 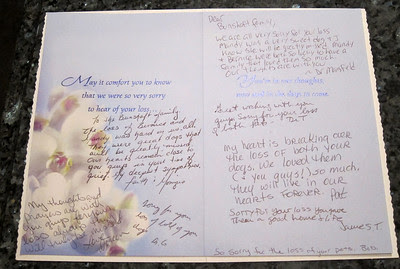 Go ahead and click on that photo, so you can read those notes. If what really matters in life is how you touch the hearts of those around you, then there's confirmation of just how special our girls really were! 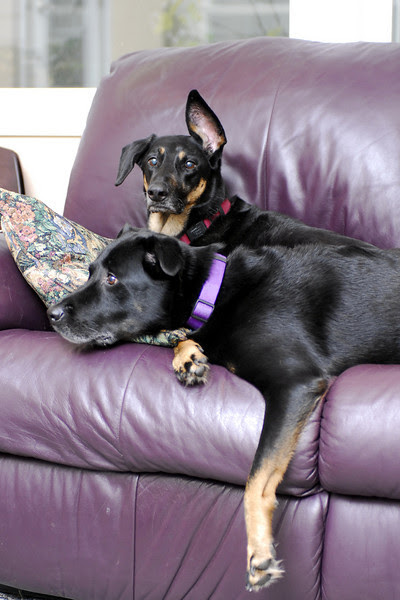 Posted by Jess at 1:21 PM 2 comments:
Email ThisBlogThis!Share to TwitterShare to FacebookShare to Pinterest

The hidden intelligence of dogs

Another Bernice memory came to mind today. While cleaning up, we found a couple of old 3.5-inch computer discs. This brought to mind something Bernice did early in her days with us, back when she was an only child.

I had received anti-virus software in the mail, and it came on a big stack of discs (maybe 10 or 12 of them). They were sitting on the coffee table when we went to work one day. Apparently, Bernice was bored, so she decided to take them apart. A bored dog chewing up something in the house isn't particularly noteworthy, but here's where it gets interesting.

Apparently, such discs have a variety of parts in them. There's the plastic case, of course, and the sliding metal part on the outside. Then inside there are other parts, like a little spring, a fabric piece, the circular disc of recording media itself and probably some other things I've forgotten.

Yes, Bernice had chewed them apart, but what we found was:

A pile of plastic casing pieces.

A pile of metal sliding pieces.

A pile of little springs.

A pile of internal plastic discs.

Every component was sorted and piled together. No one else had been in the house. The alarm system was armed, the doors locked. There was no other explanation. Our silly, young dog did this.

I don't think many people know that story. It's not one we shared too often, but we remember it well. We humans tend to think of dogs as relatively simple creatures, largely because of their inability to communicate with language, but I've often wished I could know what really goes on in their minds. They're probably far more complex than we can comprehend!
Posted by Jess at 10:04 PM No comments:
Email ThisBlogThis!Share to TwitterShare to FacebookShare to Pinterest

Did you know that U2 did a song about Mandy? If you've been reading this blog or ever visited us over the past 12+ years, you probably noted that Mandy's chief (among many) nickname was Moosedog. 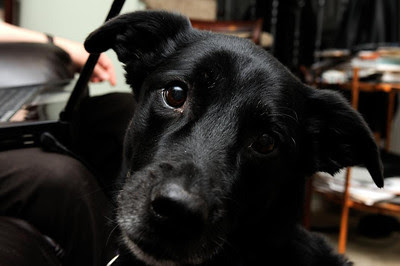 Mandy could be an enigma at times, of course in adorable ways, but still. Anyhow, I told Marc today that her U2 song was stuck in my head. That, of course, is the well known song, Mooseterious Ways. This came after the many times that I told Marc, when Mandy had been somewhat enigmatic, that she moves in Mooseterious ways.

It's not easy at times like this, when so many famous bands have written song after song about your dogs! And now, a couple more photos of our beautiful pup... 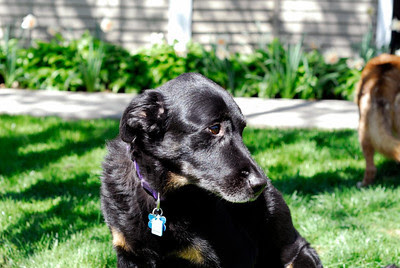 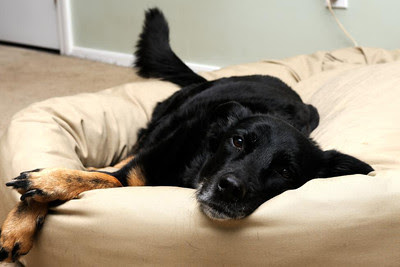 Rest in peace, baby. I'm crying as I type this. I miss you and Bernice so much!


Posted by Jess at 6:33 PM No comments:
Email ThisBlogThis!Share to TwitterShare to FacebookShare to Pinterest

In Alan Alda's autobiography, he warned readers to never have their dog stuffed. Sound advice, I think.

I can tell you one other thing worth avoiding--although it's much harder to avoid in my case--and that's using your dogs' names in various plays on words. I can't listen to most songs right now, because I have Bernice and/or Mandy's names, or nicknames, worked into them. Yes, I've always been that kind of smitten dog person. I fall in love with my pups, and this is what happens. (If you're wondering, I do this with Marc's name/nicknames, too.)

Just flipping on the TV for a mindless diversion (Wheel of Fortune) hurt tonight. For one thing, when it comes on, they introduce, as I'm sure you know, Pat Sajak and Vanna White. But around here, it would be "Pat Sajak and Vanna Black." Vanna Black was one of the many nicknames of my girl Bernice. 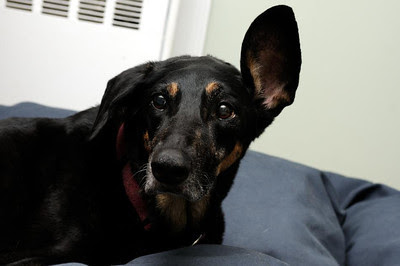 Ms. Black, not even four months ago

And then we get to the commercials. There's one for a service called "Coupon Suzy." I can't stand the ever-so-bubbly character in their commercial, but I'd always coped with that by engaging in silliness with Ms. Mandy Moosedog, or, as she would be known at such moments, Coupon Moosie. She would give me one of her looks, and that would bring a smile.

Now, it's all salt in two gaping wounds.

Yes, the happy memories will eventually overcome this pain. I know that. But for now, well... Eh, it's who I am. Dodger is at my feet as I'm typing this, and I call him by silly names all the time. So be it.

Thanks for listening, folks. It has been therapeutic. Now I'm going to go cuddle with a dog, whether he likes it or not!
Posted by Jess at 8:23 PM 4 comments:
Email ThisBlogThis!Share to TwitterShare to FacebookShare to Pinterest
Newer Posts Older Posts Home
Subscribe to: Posts (Atom)