Some things just matter more than a small chance of being hit by lightning. This post is being dictated into a little pocket recorder while standing on a Manhattan street corner in the middle of a thunderstorm. Someone else might take shelter somewhere.

However, Marc is making his way up here. We're going to see a show at Café Carlyle. Melissa Manchester. Should be fun!


Thing is, he may have trouble finding me if I don't stay in this one location. I've been standing out here quite a while, as he makes his way to join me. Yes, I could find a place to hide, and then I could send him a message. But he's coming up on the subway. He might not see the message until he came wandering out here. He might start walking around, looking for me. While the lightning isn't a huge risk, crazy drivers are. And crazy drivers in wet weather are not a good thing. So I will wait here where he can find me.

He'll get here soon enough, and then we'll walk to the show together. In the meantime, I am much happier knowing that he should have no problem finding me, rather than taking some risk with his safety. That's just the way I want it. I think it's a better way to live! At least, I'm happier this way!
Posted by Jess at 12:12 AM 3 comments:
Email ThisBlogThis!Share to TwitterShare to FacebookShare to Pinterest

I miss my Dad


You shouldn't take the wrong message from this video. There was nothing unsaid between me and my Dad. No disagreements we didn't solve. Still, this song's message is a good one--don't let disagreements drive a wedge between you and someone you love. If you can heal the rift, do it before it's too late.

The reason I'm posting this is because it's the song that broke through and let the pain from losing my Dad finally start to come out. When he died, I did virtually no crying. I did what he taught me--I was strong for the family.

I could go on and on about my theory of how, since that day, I have a well of pain in me that can be tapped easily and unexpectedly in certain emotional moments. The first time I felt that was some time after his death. Marc and I were driving on the NYS Thruway. I don't remember where we were going, but this song was playing on the radio. As I said, there was nothing left unsaid between us. I had a wonderful relationship with both my parents, and there were no quarrels to fix. But then the song got to the line (around 3:46 in this video) that was factually accurate for me: "I wasn't there that morning when my father passed away." And with that, I burst into tears.

I wasn't there that morning when my father passed away. He had just begun home hospice hours before. It was about 2:30 or so in the morning (we got the call around 2:45), and he was in the room where I'm typing this now. Again, no guilt for me. There was no reason I would have been here. We didn't even know he'd go so fast. But I don't think whether I was there or not was the point that hit me. It just took the right thing to poke a hole in the balloon of pain I'd built up. A sufficient reminder from a song full of emotion.

It seems that some of that pain will always be there, but as wonderful a Dad as he was, I suppose that's to be expected. And did I mention that today is his birthday? That's what made me think of this.

Happy Birthday, Dad! I miss you!
Posted by Jess at 9:02 PM No comments:
Email ThisBlogThis!Share to TwitterShare to FacebookShare to Pinterest

Clap for the Dodge dog!

Does that title make a song run in your head? If it does, you're both of a certain age and way too well versed in esoteric songs of a certain era. But let's talk about something more important--Dodger!

He's doing much better. From being so bad several days ago that I was literally in tears, thinking we were going to lose him, he's come back to pretty good health. Over the past several days, he stopped falling down, and he seemed to regain the use of his back legs, even if they still were a bit shaky (hey, he's an old guy!). It looks like it was something called Vestibular Disease. It's a balance disorder that's not uncommon in older dogs. It happens at other ages, too, but in an older dog, it's usually just a temporary condition that will right itself with time.

As I said, he's been making progress. Last night, he even took himself up to bed (with me right behind him the whole way to support him and make sure he didn't fall). But it still was lots of work for him.

Today, after I got home, we went out, he had some treats, and I left him to hang out on the first floor while I went upstairs to change out of my suit and put on comfortable clothes. The plan was that he'd wait for me to come back down. At least that was my plan. While I wasn't anxious for him to try the stairs unaided, I nearly jumped for joy when I turned around and saw this sight in the bedroom door... 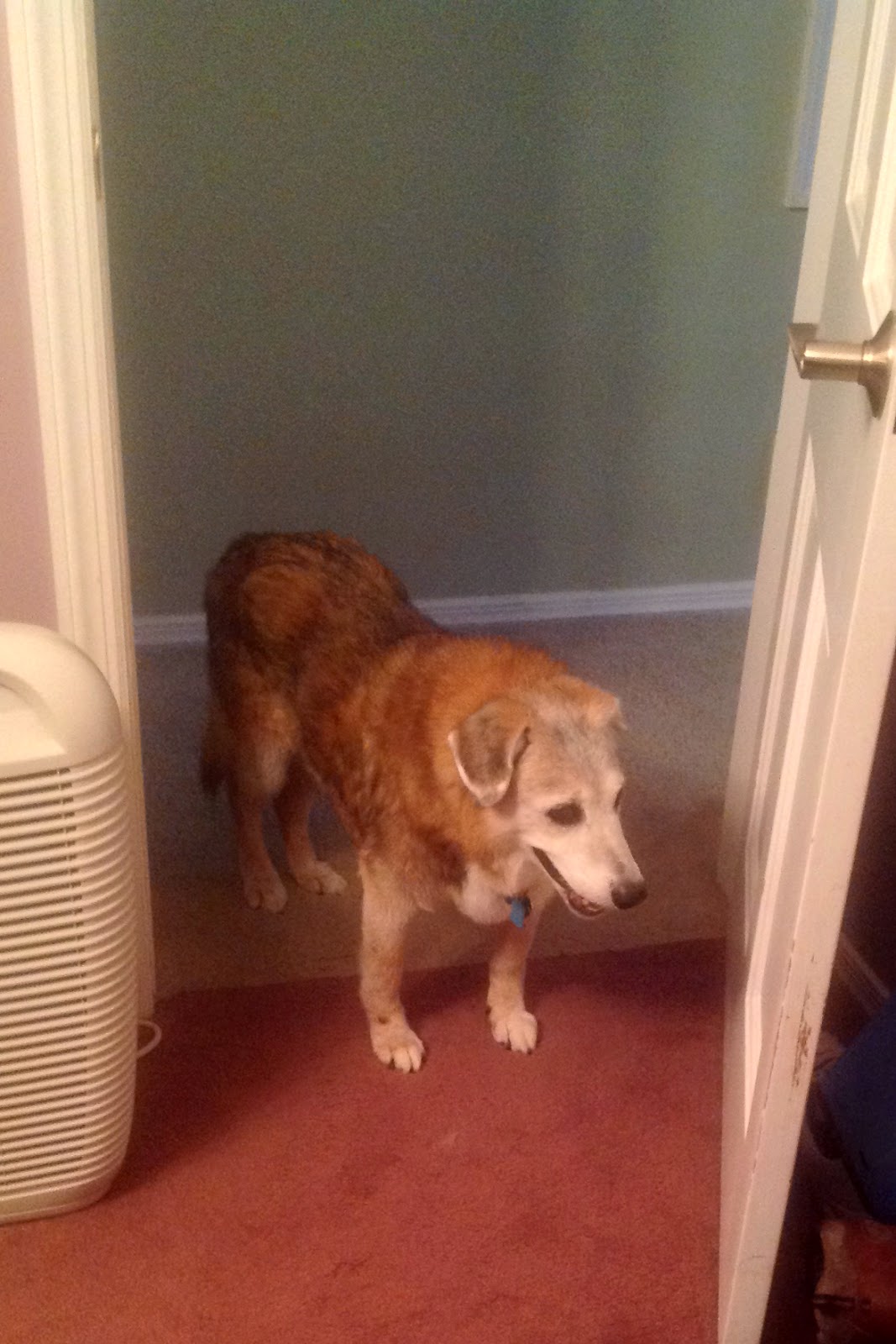